Ten inch quilt blocks are a favourite of quilters. However if you are wanting to make a smaller version of any given 10" block, with a little finagling, the math for a 7½ inch block is not that difficult. And -- for the blocks below, I have done that math for you! A win-win!

The Starlight Geese quilt block is made entirely of flying geese patches, with the exception of a single square. The star that is formed in the centre of the block looks more like a pinwheel shape to me, but you be the judge. :-)

The quilt layout illustrated on the left is set with the blocks side by side, separated by sashing strips of the same colour as the background fabric. This gives the effect of the blocks floating in the night sky.

The quilt layout featured on the right uses an on point setting of the blocks, also with sashing, which gives the impression of framing the quilt blocks. The additional colourful, blank blocks give you a spot to showcase your quilting designs. 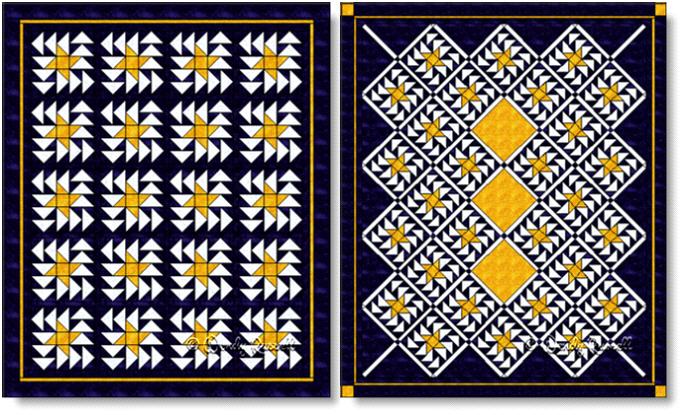 BACK to STARLIGHT GEESE quilt block