Do you want to make a large quilt, but don't have a lot of time? The 14" inch quilt block might be your choice. Larger sized blocks equal less blocks to make and the "finish line" is in sight faster. Fourteen inch blocks are typically made as seven patches, as they are designed on a 7 x 7 grid.

The Prickly Pear quilt block could be considered as a sort of "study in half square triangles". Once you have mastered those patches, this is an intriguing block to use in your quilt.

The quilt layout illustrated on the left sets the blocks side by side and thus creates a busy secondary pattern of elements between the feature of the blocks.

The quilt layout shown on the right sets the blocks on point, separated by sashing strips. The additional blank blocks create a sort of "colour block" effect and adds some extra pizzazz to this design. 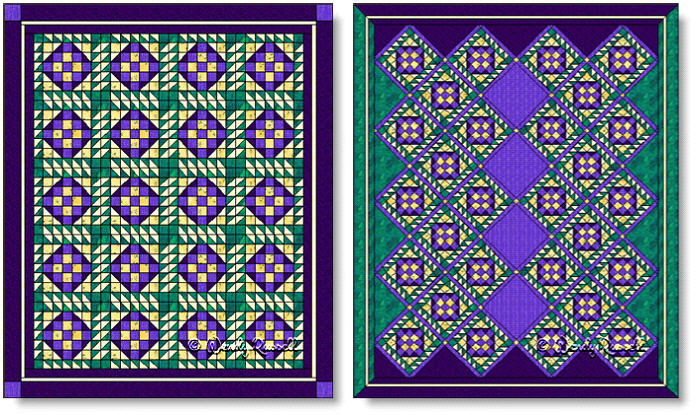 BACK to PRICKLY PEAR quilt block