For those quilters wanting a little more of a challenge, five inch quilt blocks might be the answer -- smaller blocks usually means more blocks to make. Another reason for using five inch blocks is to create a secondary pattern. By using 4 blocks and rotating each of them, you get a different larger quilt block. These larger blocks can then be laid out in variety of ways to make some very interesting original designs.

As its name would suggest, this Five Patch Frame quilt block is designed to surround the centre patch, using the five patches as a frame. In the block image shown here, the same background fabric is used for the block centre. However, this is the perfect spot to use a "fussy cut" square of fabric or perhaps a photo image. This block would be a wonderful choice, using a photo for the centre, for an anniversary quilt or for any family heirloom.

The sample quilt layout shown on the left uses a standard side by side layout, with the same block throughout. But, the quilt layout on the right uses the blocks set on point, but additionally, reverses the fabric placements in each alternate block -- giving a totally different look. 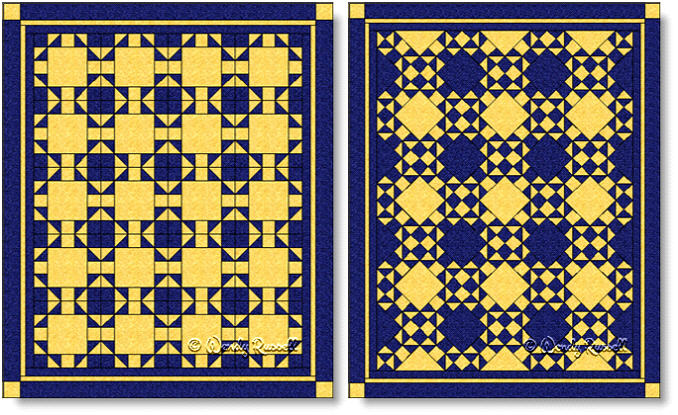